Last Friday evening, at the annual Fall Sports Banquet, the Varsity Soccer, Football and Cross Country award winners were announced after season summaries from each of the head coaches.  In an evening of celebration and camaraderie, members of each fall Varsity sport were awarded Varsity letters in addition to being recognized for individual achievements and awards.

Friday evening was an excellent way to cap off the fall sports season as Hargrave Athletics transitions into the winter sports season!

PG Basketball Members Sign National Letters of Intent
Hargrave Military Academy’s Post Graduate Basketball program had three members sign National Letters of Intent this afternoon during a ceremony held in Sanford Auditorium. Corey Walker signed with the University of Tennessee, while Kadarius “KD” Johnson signed with the University of Georgia and Derrick “FiiFi” Quansah signed with East Carolina University.
Walker, who hails from Hastings, Florida, is considered to be a consensus Top 50 player nationally by multiple media outlets. The 6’7” forward has progressed through the years and earned a great deal of notoriety from his time on the AAU circuit with Game Elite. Walker is excited to get on campus in Knoxville after completing his high school career at Hargrave. “Corey has been an outstanding addition to our program. He’s a first class young man on and off the court,” said Lee Martin, Head Coach. “Corey continues to work hard both on the court and academically. I believe the sky’s limit for him and I look forward to watching him play in the SEC next season.”
Johnson, a strong, athletic, 6’0” guard from Atlanta, Georgia, is heading back to his home state after his high school career finishes up. Johnson is a high energy guard that plays the game the right way. The University of Georgia, located in Athens, Georgia, always seemed to be a dream school for Johnson. “KD is all energy, all the time,” remarked Martin. “He’s been a welcomed addition to our program and our campus community this year. KD will continue to develop and I think he’s got this chip on his shoulder that helps him play with an out of this world tenacity. I think KD is going to do great things for the Bulldogs once he leaves Hargrave.”
Derrick “FiiFi” Quansah, a native of Accra, Ghana, made his way to the United States four years ago and played his high school career at Village Christian Academy in Fayetteville, North Carolina. The 7’0” Quansah continued to develop under the tutelage of the Garner Road basketball program, where he was coached by Hargrave graduate, David West ‘99. Quansah will head to Greenville, North Carolina to play for East Carolina University, a member of the American Athletic Conference. “FiiFi has been an incredible addition to our program this year! He’s a great kid who does things the right way,” says Martin. “FiiFi is a relentless worker on the court, in the weight room, and in the classroom. I’m excited to see his continued development on and off the court as the year progresses and in the future at East Carolina.” 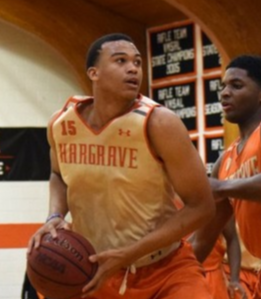 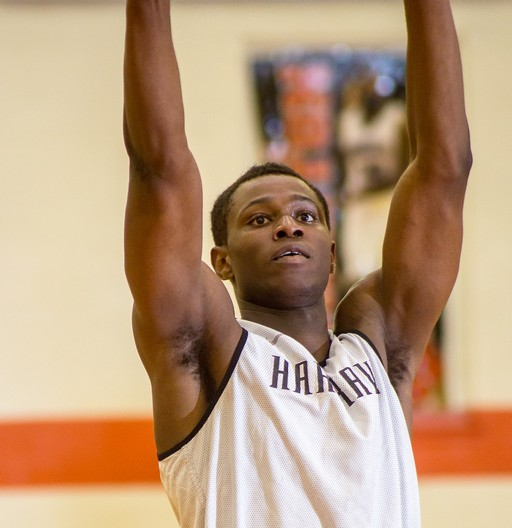 Hargrave in the Community - Veterans Day

The Corps of Cadets parade on November 9 was held in honor of local veterans.  Over 100 community members were in attendance.  The Guest of Honor was Major Harry Gillispie.  The Speaker was the Honorable Coleman B. Yeatts, Jr.

Gillispie began his military career when he was drafted in 1945 and sent to serve in Germany at the end of World War II.  In 1950 he was called up to serve in Korea. It was during this time Gillispie was captured by enemy soldiers. He escaped from his captors, but suffered a crushed hand in the process.  It took Gillispie a little over a week to reunite with his group, and by then the injuries to his hand had gone without medical attention, leaving him with disabilities in his hand. He continued his service on into the Vietnam War in 1962.  He later joined the Hargrave staff in the Military Department.

Yeatts is a Hargrave alumni ('61). He retired as a Lieutenant Colonel and a retired Virginia District Court judge. His comments addressed the impact of veterans from developing personal character and strengths to making last impacts on our local, state, and national community.

On Veterans Day, a representative of the Iwo Jima Association of America (IJAA) spoke to the Corps of Cadets at a school assembly. Not only were the historical facts of the Battle shared, but the efforts to preserve the island and honor the fallen in the 75 years since in the battle were discussed. More importantly, the character and role of the members of the Greatest Generation were discussed.

Cadets were challenged to remember and look within themselves about the characteristics that made these men great in and out of battle.

Col Brown was the keynote speaker for a ceremony which recognized and celebrated military veterans. Veterans from the Marines, Navy, Army, and Air Force were present and given thank you notes from the students.

At the close of the ceremony, fallen or deceased veterans were recognized with a moment of silence and the playing of Taps by Cadet Michael Lewis ('20). LTC Broomell and CPT Ott led five cadets on an overnight hike to McAfee Knob, outside of Roanoke, VA. As a "first outing" the intent was to get newer scouts oriented in the basics of hiking and campcraft. Mother Nature didn't quite share that intent and tried to discourage our intrepid Scouts. The first day’s hike took them up the trail to an overnight campsite not too far from the Knob. They sheltered against a pretty aggressive wind chill, with one report citing single digit overnight temperatures. The morning sun found nobody willing to quit (or wanting to stay cocooned in mummy bags) and obligingly warmed everyone up to where it might even have looked like a summer hike! They pushed up the rest of the steep trail to be rewarded with the grand vista that makes McAfee Knob one of the most popular and picturesque sections of the Appalachian Trail. Taking the long way back down the mountain, the newer cadets discovered how comfortable a heated bus can be as they returned to campus to resume their normal school week schedule! Cadets enjoyed an ice-skating experience due to the generosity of Hargrave's Parent Council. With skill levels ranging from first time skaters to veteran hockey players, another bond of brotherhood was "iced in" with plenty of comedic moments and advice on the ice.

Exciting news: Parent Council has created a Facebook page for parents of current cadets! Follow these quick and easy steps to join: While cadets are hard at work in the classrooms, on the athletic practice fields, and building relationships on barracks, the staff, alumni, and contractors have had its own set of tasks: Hanging of the Greens

All in the community are welcome to join the Hargrave family at the Hanging of the Greens in the Cheatham Chapel on our historic campus Sunday, Dec 8 at 6-7pm. The Hanging of the Greens service is one of the main events highlighting the Faith pillar of Hargrave Military Academy. At the service, we celebrate the nativity of Jesus with the recognition that He is the Messiah, born at Christmas so that He might die to secure humanity’s salvation. Without Christ’s birth, there would be no hope for our faith. Therefore, we observe the Advent season with hopeful expectation of Christ’s promisesMusic will be provided by the Hargrave and Chatham Hall choirs, the Hargrave Band, and the Hargrave Highlanders. Our fine young men will also perform Christmas Hymns and give readings.